It would seem like it. Cold, snowy and blustery. I don't really much care when our snowpack arrives as long as it does. It is a mere shadow of what we are use to having, but some is better than none.

Yesterday I took all 7 of the dogs down for canine influenza shots. Good grief, I don't ever want to do that again if I don't have to. Jack and Spike whined and chattered their teeth the whole way down in their crates. Robin "trilled" from his and threw up. Hazel just threw up and for good measure pooped on the way home in her crate. Pogo was a good silent crate rider and the two queens, Stella and Mandy slept together on the front seat. I suppose it was good practice for an evacuation. I have more room than I thought in the Outback. Love my Subaru!

The weekend was spent working on the new to me Marilla Walker Isca dress/tunic pattern. 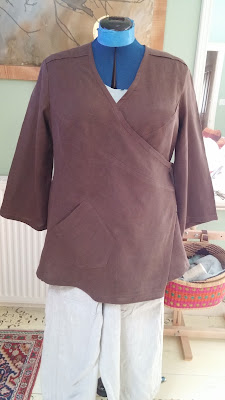 I am smitten and actually quite impressed with the drafting and such on this pattern. 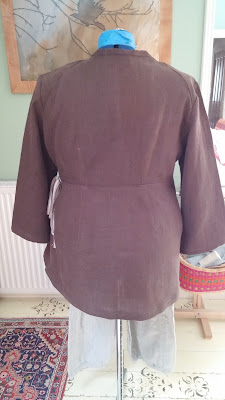 It was fun to make, a little challenging and the fit as actually perfection for a first run through.


I shortened my wearable muslin quite a bit and I kept thinking of Gone with the Wind since this linen is the very last of my old curtains!

I've had a lot of fun seeking out some new and different patterns.

I found this oldie quite by accident on Etsy (where else?) and since I had such good luck with the Java Jacket I figured why not.

For those looking for a Mom update, she is completing her 3rd round of chemo today and then they will do a scan to see how much it has spread and where. She is getting her custom made wig today. I offered to pay for a head tattoo if she wanted it. She declined. ;-) She has tolerated the chemo well. A bit run down, the cough is persistent but not surprising considering the cancer has spread to her lungs.  I have my own doctors appt. Monday for a check-up and then I'm going to swing up to the manor and pick up her up for a wee bit of shopping and an early lunch somewhere nice.

On our walk this morning with Spike and Robin we followed bobcat tracks! And since it is snowing
I'll leave you with this classic ear worm by Simon and Garfunkel.

Oh and those young adults from Parkland Florida, you are all awesome. No one calls out BS like Emma Gonzalez. 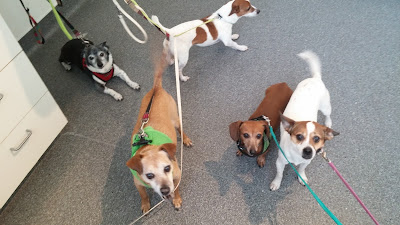 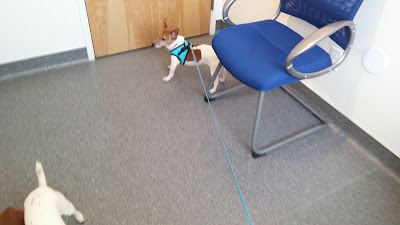 SaveSave
Posted by Theresa at 9:07 AM 9 comments:

Which means something silly and funny all at once. In my case, catching mice in the tack room in a tall 5 gallon bucket and releasing them every morning in the woods. It usually involves stumbling around in the dark, goats bleating louding in the driveway waiting for their food and wondering if I am indeed catching the same mouse or two or are there really THAT many of them around the barn? The barn cat is terrified to go outside since the mysterious disappearance of Juno and frankly, who would blame her. So I toss her out during the day and bring her in before dusk, usually waiting pressed to the side of the basement door. Sigh. Maybe someday I'll be in a bind in the woods and the Mouse King will come to my rescue. HA!

I had boatloads of fun with the Sew House Seven Nehalem Pants. 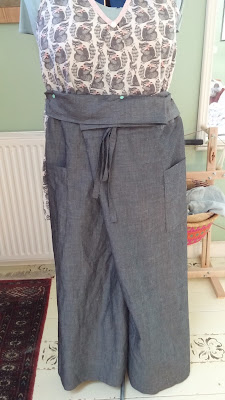 I was unsure if it was worth the effort and then low and behold, I love them! I am making a few changes, like a bit of elastic in the back and maybe trimming just a bit down in the width of the leg, but otherwise, they are cute and comfortable and another pair is already cut out.

Today I'm working on the new Marilla Walker Isca dress, which I've shortened into a tunic. This is a muslin and there is no point in wasting a ton of fabric if it doesn't go well. Pics when done unless of course it is such a horrific mess it must be disposed of immediately.

I had a wonderful lunch out with a good friend and when we finally parted I found out this was happening in my neck of the woods.

It was, as I like to say, slickery. Thursday dawned cold and clear, the roads were plowed and rocked and not too terrible awful if you watched your speed. It was icey though all the way into the valley with temps holding in the high 20's F.

FedEX did manage to get to my house and drop off this little gem. Cindie thinks it looks like a luggage rack and well, it does, a very high end expensive one! 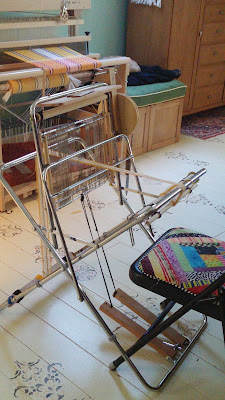 I am squandering all that Saori feel good weaving and using it right now as a band loom. I had looked and looked for a while now for an old Heritage two treadle inkle loom and decided I should just reverse engineer my needs. A narrow two shaft counterbalance loom. Who makes one of those I thought..hmmmmmmmmm. Then of course, like the hot kiss at the end of a wet fist it came to me.
(Note Firesign Theater line, Oh Nicky Nick Nick I miss you!)
The thing weighs 15 pounds. Lighter than luggage! 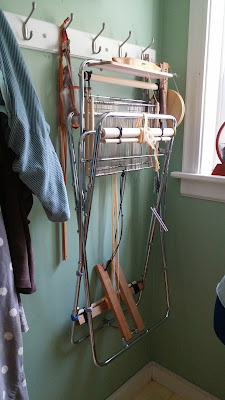 Instead of leaving you with music, I'll leave you all with this piece of silliness that I grew up on.
I (still), know most of the lines from this and many others. Enjoy!

Parting shot: Stop, Dop and Roll. Mandy's MO when it's time to go out. 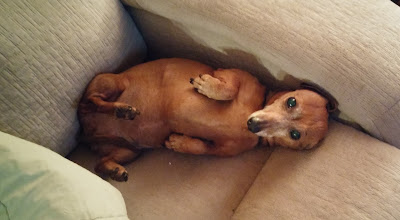 Lately I've been binge watching Poldark.  PBS has some of the best series around IMHO. I  caught a Poldark one night (probably season 3), and it caught my attention. I found season 1&2 on Amazon and have been watching one or two nightly. Beats the news these days hands down.

Also on the bingeing list has been author Juliet Marillier who is a New Zealander and writer of adult and young adult fantasy. Escapism at it best. I think I'm on her 5th book so far.

In amongst the binge watching and reading, the towel warp on the big Macomber has finally started. 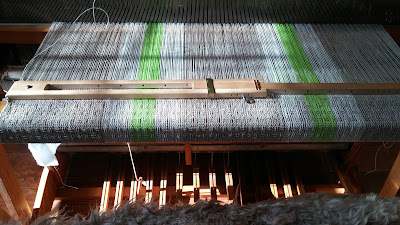 I have to tell you weaving with hemp is a bit fussy and rough. I'm not sure how these will turn out but what the heck, it will have been a learning experience from start to finish!

The sewing salon has seen some action too. I made another Java Jacket as a vest, reusing the double sided wool from a Soho coat I hated and adding some other fun wool scraps along the way. 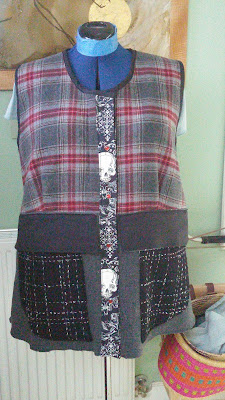 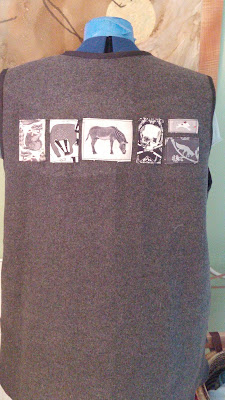 I went down a size and I really need to go down another. I was afraid to with the thick fabric but I will refit the whole pattern next time around using summer weight linen. That's the plan at least, for now.

One of the new Linnet Japanese patterns got a work out too. I ditched the collar, I always do. I as impressed with the sleeve fit and the overall shape. This is a wearable muslin and there will be a few additional minor tweaks, but I'm pretty happy with it right out of the envelope. These patterns are well written in English. 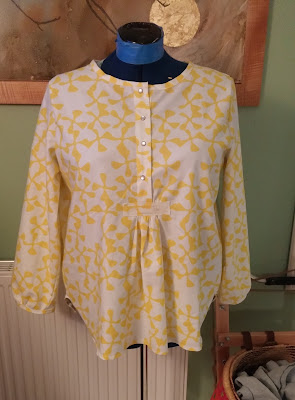 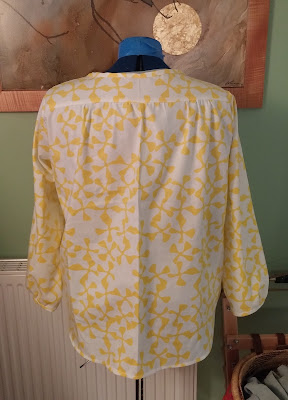 I have a new pants pattern (Sew House Seven Nehalem Pants), cut and ready to hit the sewing table after I finish this blog post.

There just hasn't been much going on. We're all getting mighty worried about the upcoming fire season. We have had NO SNOW and there is no snowpack. Rainfall has been pretty scant too.
Scary stuff but might as well have some fun with it now. I leave you with this catchy rain song from The Weather Girls! 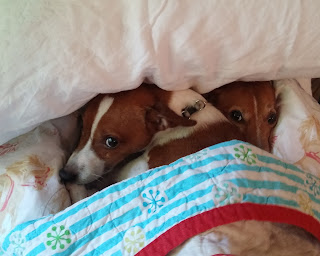 It Was Pretty Super If...

You were an Eagles fan. Well played Philly and congratulations!

For all New England fans....onto next year. 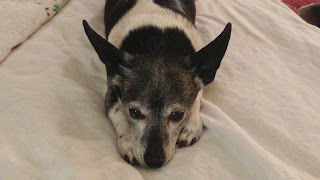 So Just How Super Will the Bowl Be?

It could really stink too, it's all a matter of perspective. I'm firmly on the Patriots side of the field. They came into existence not long after I did and Sundays have always been a mixture of football and Disney in my mind. They started out as the Boston Patriots BTW. I was a fan during the Grogan years, the Plunkett years, Doug Flutie lived right over the town line in Natick. My Mom picked up his dog one day when it got loose.  I want to say it was a Cocker Spaniel, but it might have been a Golden.She was the Wayland Dog Officer for many years. And then of course, I just can't stand the Eagles, the team that hired Michael Vick. I'm a believer in second chances but for some crimes I just can't see it in my grinchy little heart to forgive cruelty against animals or kids.

So other than nursing a long standing grudge what exactly have I been up to these past 11 days?
Well, I made a wadder, again. Trying new things often produces that sort of thing. I don't show wadders unless they are funny. This wasn't. I think in the end it was fabric choice that caused the fail.
I'll try the pattern again.

This non wadder came out of the salon last week. I have a Patricia Rose done in a sleeveless short top cut out for summer wear and then I think I will give this one a rest. I do love it though! 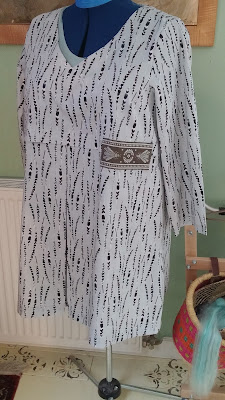 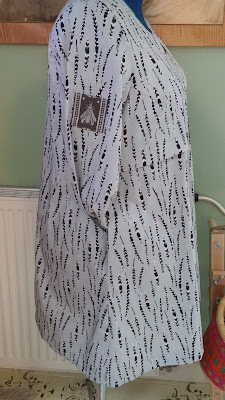 Some new inspiration arrived at Salon Runamuck, patterns and fabric procured in after holiday sales from faraway places. 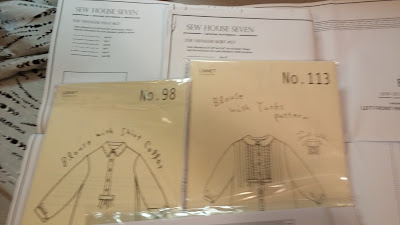 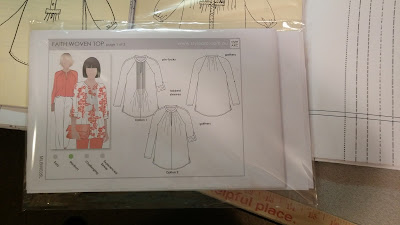 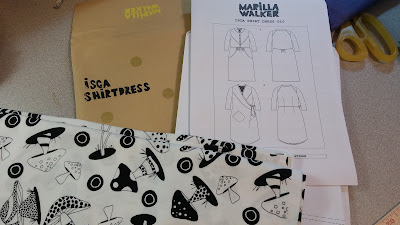 Patterns from Japan, Australia and the UK with fabrics coming from Taiwan, South Korea and back east! 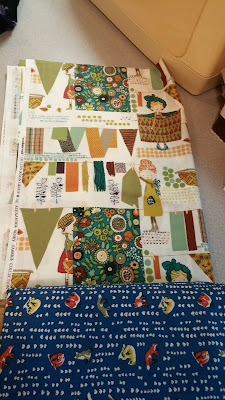 I have gotten some weaving time in, Jack helped out with the last of the narrow rose path warp. Such a good boy!


The beautiful blue warp is being would for those Summer & Winter sheep towels going on the Spring. Slow as Methuselah as usual.

Lots of errand running and a few fun lunches and coffee meet-ups with friends. Cindie and I did yesterday morning at the Grants Pass Growers Market and then onto the bank account killing Kitchen Store. I got the most wonderful breadbox. 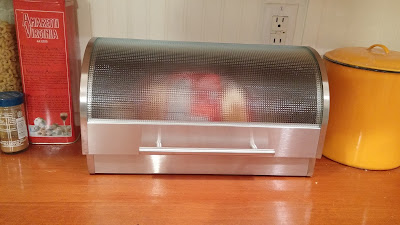 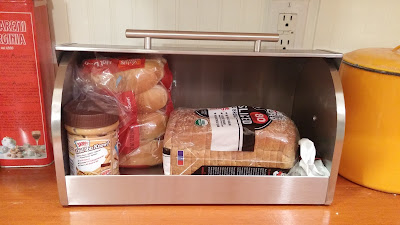 I've been using a drawer and the loaves of bread always take up more room than I would like. The top is glass and it is wonderfully made. It would seem a bunch of other things popped into my basket and in the end it took both of us to carry all the bags to my car. Thank god that store isn't in Ashland!

My Mom has officially lost all her hair and she now has a wig. One of her friends at the Manor turned her onto a wig maker in the area and she has one for now and one being made.  She also has a beautiful soft camel down hat that was spun by me and knitted by Michelle and given to me. My mom really needed something soft and warm so it is on loan and much loved.

Hope you all have a great Super Bowl Sunday, watching the game or the Puppy Bowl. I switch between them. I think there is a kitten bowl too... I'm leaving you all with this song by Queen. GO PATS!

Parting shot: Nothing like freshly plumped pillows for napping I say! 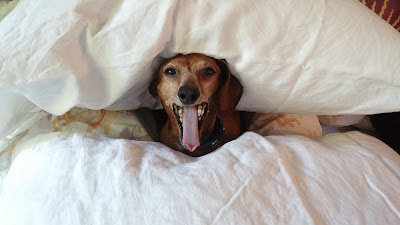