A Good Buttonhole is a Thing of Beauty

And my long neglected Bernina Virtuosa 150QE ( AKA Bernie) makes a fabulous one. 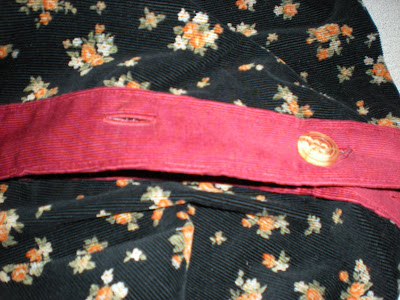 In fact she made 6 for me yesterday, all just as nice and easy as the first. Now if there was a machine that made my hems even I would be in heaven on earth as far as sewing
was considered.
Wednesday I met with fellow blogger and fiber purveyor Cindie in Medford OR and we spent the morning sifting through the local antique/junktique booths in two huge buildings. Talk about trash and treasure. There was a lot, of each. I brought home buttons, lots of buttons. 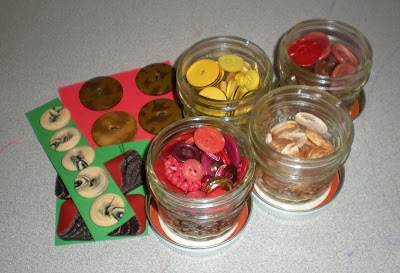 Addicting little collectibles they are too!
On the weaving front, two special prayer flags have finally finished the first part of their journey and will head NNW and SE from here respectively. 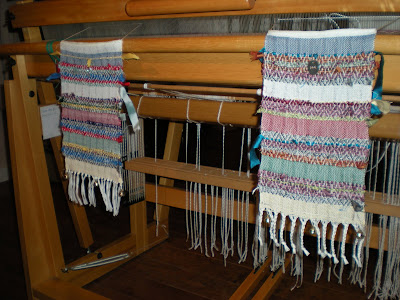 They each have prayers the recipients requested to include in honor of their special friend. 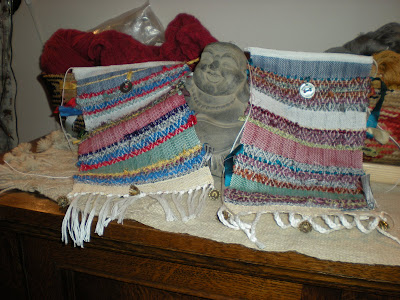 Hey Baby Delta has some action and I am over halfway through the last pillowcase.
The warp for Hannah Hollandia is being held up due to my indecision about which towel pattern to put on. I am leaning towards the Friendship Towels in Handwoven's Design Collection #18 A Treasury of Towels, but also a simple 4 shaft birds eye in yellow and white is appealing to me. Maybe I'll just have to flip a coin.
Snow in measurable amounts has finally made it into our forecasts. Yesterday about 4 inches of the white stuff graced our little mountain hideaway. Like most early storms, this started as rain, ended as snow, made mud and will have frozen over night on the roads as a slick sheet of black ice. Oh joy oh happy skating in the car. I planned ahead and did my shopping Wednesday. The back of the Subaru was packed full of food and feed, and buttons by the time I headed up the mountain. Along my drive (and quite close to town) I spied a bobcat stalking in a field of winter stubble. I stopped and watched until he disappeared like a ghost into the browns and tans of the field. Smug that I was probably the only soul besides him and maybe the mouse he was stalking, that knew of his presence.
Parting shot: Zen Master 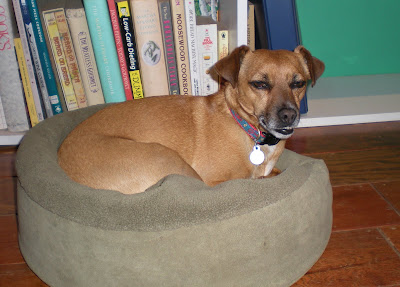 Buttons are fascinating!!! I have both of my Grandmothers' button boxes, and they still enchant me! It looks like you found some great buttons on your quest.

Oh my, that is a very zenlike face, isn't it!

So true about buttonholes! My viking does a great job with them too.

Have you ever done a post about your prayer flags? I'd love to know more about this.

Is that Stella? Can't be...she looks too old.

Love buttons and have a great old collection. I can remember putting a button on a string and making it whiz round and round.
What a cushy dog's life. lol

I have some of my mothers buttons and I have been saving buttons for 30 years myself. As I add a few new ones every so often, I often wonder what will happen to them later when I've gone to the big Studio in the sky!

As one of the recipients of the prayer flags, we can't thank you enough for all your efforts on our little Connor's behalf.
The tears are less and we're starting to remember the happier times.

We do have our name down for a puppy or slightly older Welsh terrier from Orting, WA next year. Our hearts will be ready then...

You are so right when you say there's something quite satisfying about making a good buttonhole. It sounds like you are having a great time sewing lately!

Congratulations on the bobcat sighting. That must have been something to see. Enjoy your snow!

Wow...so much to respond to. The prayer flags are lovely and moreso blessed to the recipient.
Button, button who's got the button? We do I guess...I have a box of buttons my Mom held onto and it has comingled with mine and my grandmothers (two) to be a handsome collection! I was just in there the other day looking for a button for Jack's jacket and found one that matched in less than five!
We just had a bobcat photoed on a game cam here last week...they pass through regularly on the back 40, along with the coyotes and bear and whathaveyou. Lovely if far away from the farm!

Valerie, The start of the Prayer flags for me can be found here: http://runamuckweaving.blogspot.com/2009/04/weaving-with-feeling.html
They have evolved over time and are still evolving.

Reads like quite a lucky bunch with the button collections. My mother is not a big sewing fan and my Grandmother, who spent her life sewing, must have had buttons everywhere, but alas, when house clean up got done, far far away from where I was, the buttons ( and everything else) went somewhere, I know not where. Pictures, personal items etc. either tossed or yard saled in a fast effort by my Uncle to sell the house and grab the cash.
Cindie, it was a rare moment that Jack looked so zen like.
Oooh Susan, a puppy, how exciting. Get two they're small! ;)
Judy, I will enjoy the snow, as long as it stays that way. NO RAIN PLEASE! Yes, the bobcat was exciting, but not near as exciting as the lynx that wandered into our barn one winter. Hard to tell who was more surprised, me or him/her.
Nancy, yes, the flags are not fancy weaving, in fact rather course compared to what these two can weave themselves, but they are done with lots of love for those being honored and on their journey away from us.
Wildlife is always welcome a distance from the barn!

Good buttonhole? Excellent buttonhole! I love the prayer flags! Does SE mean me?????? Getting excited about it now!

My daughter and her husband bought a Subie this weekend - the Outback. They finally saw the light. If you're going to drive in snow, well, it just makes sense my Dear Watson.

p.s. Wish I had a machine that made lovely buttonholes. Jealous.